Launching with fireworks and live performances all the way through December…

To celebrate the grand opening there will be a daily schedule of live performances happening throughout December, and a fireworks display bursting across Yas Island skies every weekend from 9pm.

The Miral-developed waterfront location is packed with more than 30 restaurants and bars, features a 3km boardwalk and will play host to a scene-stealing leisure jetty, Pier71. We initially reported the opening as happening one week earlier, but that date was pushed back.

Talking about the launch, Gurjit Singh, Chief Portfolio Officer at Miral, said: “The opening of Yas Bay Waterfront is another proud milestone for Yas Island. This new destination supports our vision for Yas Island to become a global convergence for entertainment, leisure and business”

In addition to the venues listed below, Miral’s announcement made via Abu Dhabi Media Office made reference to a further venue — ‘Drop Cafe’ and “another two [unamed] interesting concepts are anticipated to open for business in the coming months.”

One of Dubai’s most popular cult ramen joints is headed for Pier 71 on Yas Bay’s waterfront location. Known for its hio, miso, and shoy broth rocking feats of noodle gloriousness, this authentic Japanese ramen-ya is going to be an electric addition to the capital’s Asian cuisine scene.

This Mexican eatery was conceived and raised in the mighty culinary forge of Toronto. As you might expect, coming from Drake’s backyard, the soundtrack at the Latin cantina’s network of venues is straight up, golden age, hip hop and R&B. This Abu Dhabi outpost builds on the success of the Dubai location, found at the InterContinental Dubai Marina. The team behind the venture has promised the capital’s version will be a more polished version, with a more mature edge to its interiors, menu and soundtrack. Take its mood lighting and hacienda-style terracotta living walls for example — conceived by Canadian designer Ian Rydberg of Solid Design Creative. This venue will also feature a raw bar which we’re hoping will go hard on ceviche;  an outdoor terrace, overlooking the Yas Bay Waterfront; and a separate bar area devoted to degustation of that most polarising of agave-based tipples.

Talking about the project, Hamdan Al Khafaji, owner La Carnita UAE said: “The 2.0 version of La Carnita will be more grown up and elevated, showcased in the design, music, uniform, and bar program, all of which have been carefully curated by myself and the team. Abu Dhabi has been waiting for a venue like this to create hype in the city.”  @lacarnita_dxb

Dubai Design District’s (D3) electric Japanese restaurant and pizzeria, is making its way to the new multi-billion dirham Yas Bay development. With its neon stripes, honour badge from the academy of chic interiors, and innovative artworks, we feel Akiba Dori will fit into the neighbourhood seamlessly. This new outpost of the devastatingly cool Tokyoite diner, Akiba Dori is expected to open around the middle of September 2021. The restaurant will be located on Yas Bay’s Pier 71, and will feature a terrace with some pretty incredible skyline views. We’re too early to get confirmation on the final menu but, we have been told to expect some returning favourites from the Dubai collection. @akibadori

The Lighthouse Restaurant & Concept Store is coming to Abu Dhabi’s Yas Bay, it’s likely to launch in the last quarter of 2021, it’ll have space for 145 diners and excitingly, it will be licensed. As you might expect from the delightfully and deliberately quirky engine of innovation that is D3, The Lighthouse isn’t your conventional restaurant. Conceived by Hashem Montasser and Hany Bassiouny and launched in 2017, the brand blends a gastro dining experience with a boutiquey retail space. They’ve got a great selection of books, scents and objects of curiosity that make gifts for those people that are ‘really hard to buy for’. The menu is a little bit hipster, and we mean that in only the kindest sense. That guarantees you great breakfasts and top quality coffee, imaginative food creations, health and nutrition will be a strong part of menu identity, and you’ll be able to go vegan if you want. @thelighthouse_ae 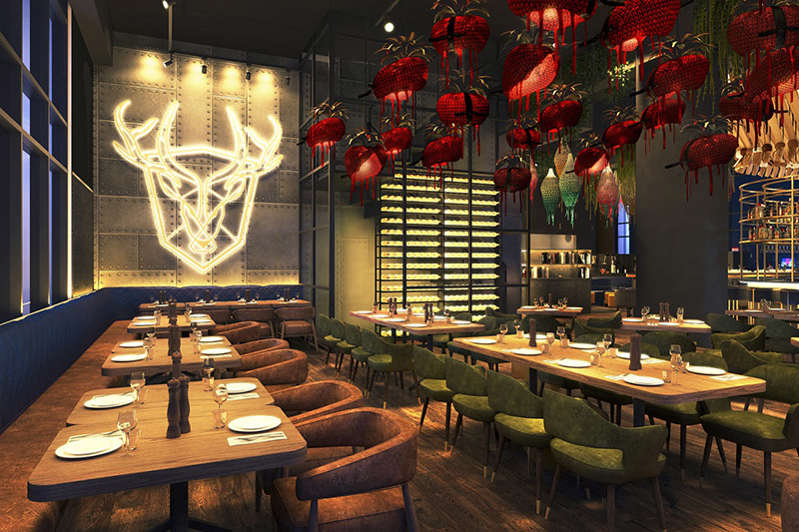 Aussie steakhouse Hunter & Barrel, which recently opened a Dubai location at Vida Emirates Hills, will be bringing a much needed ‘meating place’ to the capital’s new leisure and entertainment district. Here’s what What’s On had to say when they recently visited the Dubai venue:

“The bar area is cool and contemporary with a huge oak table. Dishes are plentiful at Hunter & Barrel, and very reasonably priced, with steak prices starting at Dhs120 for a fillet steak.”

“The Hunter’s sharing platter (Dhs150) comes piled high with some serious comfort food in the form of sticky, smoky chicken wings, lightly battered prawns, spicy calamari and, our favourite, the three cheese dip, served hot and gooey with a helping of fresh-baked pita bread for dunking.”

Rob De Villiers, Middle East Managing Director for Seagrass BHG (the group responsible for Hunter & Barrel), said: “We are excited to share our exceptional charcoal roasted dishes and tender cuts of beef with the greater Yas Island residents and visitors”.

Cannes-born haute hub of gastronomy, Paradiso is the globally-acclaimed Mediterannean restaurant from the Michelin-endorsed culinary double act of Nicole Rubi (the woman behind Nice’s La Petite Maison) and Chef Pierre Gagnaire (Fouquet’s). Their ‘medium’ is light gourmet dishes using local, seasonal ingredients — reinterpreting Mediterranean classics and giving them a taste renaissance. Expect the menu to include items such as Nicole’s petits farcis (stuffed vegetables, often courgettes); deeply flavourful escargots; cauliflower bavaroise; Paradiso’s signature pizze; and lamb shoulder preserved with spices. Diners will also be able to choose from a connoisseur’s collection of Pasta; roasted young cockerel; and grilled prime rib of beef. The man behind the mixology, Emanuele Balestra — has also ensured that the restaurant’s botanical theme carries through into the crafting of the signature drinks. Expect exquisite understated luxury for the interiors, extensive terrace and dazzling decor from the design minds of Italian architects Vudafieri-Saverino Partners. Botanical elements run through the venue with features baring verdant hues of olive, caper and sage leaves; elsewhere, blushes of saffron yellow and cirtus orange duel with ceramic tiles, rattan, Sicilian stone, brass, velvet and silk.

Solutions Leisure Group, the team behind Dubai mega hospitality projects such as Lock, Stock and Barrel, STK and Asia Asia has announced that the latter will open in Yas Bay. The What’s On Award-winning pan-Asian restaurant is known for its party atmosphere and excellent fusion of Asian and Middle Eastern flavours. Let’s hope for a gorgeous terrace overlooking the new Bay, too. asia–asia.com

Initial renderings of new entertainment destination The Central suggests that an arcade complex, complete with Pac Man, air hockey and simulators, is headed to the new Yas Bay development. There’s also a retro diner inside, which we predict will serve up a selection of American comfort food. There’s even been (and we stress: Unconfirmed) whispers that it might include a bowling alley.

Another solid hit from the Solutions Leisure Group, Lock, Stock and Barrel has been the go-to party-into-the-early-hours venue for a few years now. Restrictions-permitting, we can expect live music, ample dancefloor space, and a menu of international bites, including its signature metre-long flatbread at this Yas Bay venture. lsbabudhabi.com

The Trilogy by Buddha Bar AKA Siddharta, Zeera and Bushra

Capital Motion, the team behind Siddharta Lounge Abu Dhabi by Buddha Bar says that it’ll be a “dazzling rooftop playground complete with a Mediterranean menu, clever mixology, jaw-dropping views and state-of-art concept events.” Big statement. But judging by the success of its counterpart in Dubai, it should live up to the hype. We’ve also heard rumblings of two more exciting Buddha Bar concepts (Bushra and Zeera, reportedly with Michelin Star/celebrity chef backing)  making their way to Yas Bay. More to come on WhatsOn.ae.

Back in April we teased the idea that iconic Ibizan rave cave, Cafe Del Mar could be heading for Yas Bay’s new Hilton. But now we know for sure — it’s all confirmed, along with the *pinch us* tantalisingly imminent launch date of “later in 2021”. It’s coming to Abu Dhabi under the expert stewardship of Capital Motion (who are also delivering Siddharta Lounge, Bushra and Zeera in Yas Bay soon). Talking about the announcement, Mario Samaha, Founder of Capital Motion, said: “We are thrilled to be expanding our collaboration with Miral at Yas Bay Waterfront and bringing Café del Mar to Abu Dhabi. This latest addition to the Capital Motion portfolio and to the already impressive line-up of nightlife and F&B outlets at Yas Bay Waterfront will offer guests a truly unique experience at a world-class entertainment venue.” Cafe Del Mar is the stuff of Balearic legend. During its 40 year non-stop party manifesto, it launched an uncountable number of ‘chilled house’ playlists, hosted almost every DJ hall-of-famer, and established itself as an essential element of the Ibiza music phenomenon. New Cafe Del Mar venues have sprung up in Phuket, Tenerife, mainland Spain, and there’s even one offering warm welcomes and fond farewells at Ibiza Airport. The news that the Cafe Del Mar Beach Club will set up shop at Hilton Abu Dhabi Yas Island — presumably with the ‘manmade floating beach’ concept that was announced prior to launch, will be welcome news for those still mourning the closure of the emirate’s other ‘big in Ibiza’ sesh spot, Blue Marlin…

The capital’s dining scene is taking a giant bite out of the big apple, with New York-based pizzeria Emmy Squared, making its way to Abu Dhabi’s Yas Bay. Set to open in the final quarter of 2021, this purveyor of fine carbs, deals in Detroit-style pizza — a destinct, square-shaped pizza with “a crispy bottom, fluffy focaccia-like dough, caramelised cheesy “frico” crust, and signature sauce stripes.” Despite being a little over five years old as a brand, Emmy Squared has 13 locations across the East and South East of mainland USA. They offer a mix of traditional and more innovatively-topped red and white pizzas such as the Colony² (Ezzo pepperoni, pickled jalapeños, honey), and the Big Ang (house sauce, ricotta, double pecorino, meatball, banana peppers). It’s not just abot the ‘za either, according to the website their double-stack burger, the Le Big Matt, was named ‘number one Best Burger in Nashville’ by The Tennessean and Nashville Lifestyles; one of ‘The Best New Burgers In NYC’ by Gothamist; and one of the ‘20 Best Burgers in NYC’ by The Infatuation. And because it will be a licensed venue, you’ll be able to pair your crust-stuffing with a collection of adult beverages including signature mixology.

Web Report 3 months ago
Bentley presents the most sporting Bentayga

Bentley presents the most sporting Bentayga

UAE Traffic Violations can now entail fines of up to Dh50,000.

UAE Traffic Violations can now entail fines of up to Dh50,000.