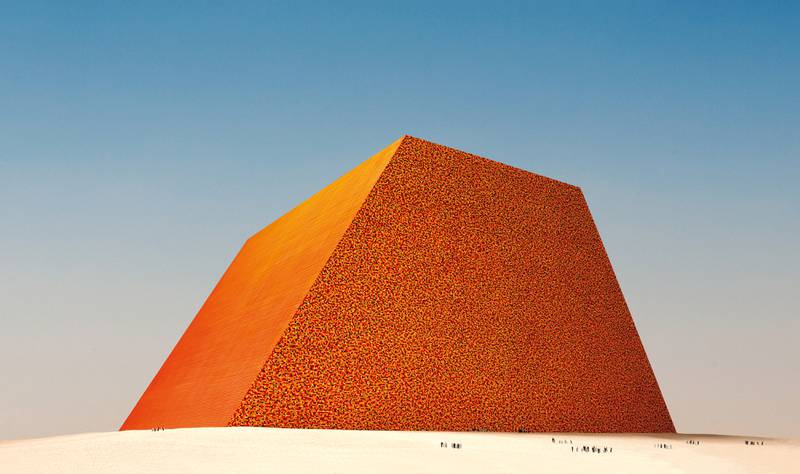 As Parisians prepare to be treated to a spectacular European farewell from the celebrated artist and sculptor Christo, Abu Dhabi’s Liwa desert awaits its own last demonstration of his genius.

For 16 days from September 18, the Arc de Triomphe will be swathed in silver-blue rope and fabric, as meticulously planned by Christo before his death in May last year.

It will be the realisation of an idea that came to him in the early 1960s, using 25,000 square metres of fabric and 3,000 metres of red rope, all recyclable.

But the artist, born Christo Vladimirov Javacheff in Bulgaria, had one more unfulfilled dream: the construction of the world’s biggest sculpture in the UAE, a country he fell in love with in 1979.

Once the Arc de Triomphe’s temporary cloak has been carefully removed in time for November’s Armistice ceremony marking the end of fighting on the Western Front during the First World War, attention will turn to Abu Dhabi and Christo’s long-planned mastaba.

As long ago as 1977, the artist envisaged a sculpture 150 metres high and 300 metres long using 410,000 multi-coloured oil barrels in what Christo’s website describes as a “mosaic of bright sparkling colours echoing Islamic architecture, The Mastaba [being] an ancient and familiar shape to the people of the region”.

Valdimir Yavachev, Christo’s nephew and project director for both the Paris and Liwa initiatives, believes the sculpture could become reality in between five and 10 years.

“My uncle used to talk about the software and hardware stages of a project,” he tells The National. “Software was when it was in the hearts and minds of the team, hardware was as we moved on and started physically building.

“So The Mastaba is still at the software point. But we have done all the engineering, we have the location and we are ready to go.”

Christo and his French wife Jeanne-Claude, an important collaborator in his work, first visited the UAE in 1979 – two years after the artist came up with the idea of The Mastaba – and their introduction to the country was followed by many more trips.

They identified a site in Gharbia, near the oasis of Liwa and approximately 160 kilometres south of Abu Dhabi city.

“Christo was a very visual artist,” his nephew says. “He found a very strong connection with the quite incredible, stunning beauty and light changes of the desert, but he also had a great relationship with the people he met in Abu Dhabi.”

Yavachev says his uncle was “very much with it” until his death last year, aged 84. Jeanne-Claude – “a very critical collaborator with an eye for the smallest detail” – died 11 years earlier.

The Arc de Triomphe project, first mooted by Christo in the early 1960s, has been delayed twice. France’s Bird Protection League asked for a postponement because a kestrel falcon was nesting inside the monument; “we are quite used to bird-related issues”, Yavachev says. Then, the Covid-19 pandemic forced a further delay.

Philippe Belaval, president of the Centre des Monuments Nationaux, a French government body that conserves historic buildings and manages the monument, has acclaimed the posthumous Christo project as “an event of global resonance”.

No public funds are involved. The £12 million ($16.9m) cost was met from the proceeds of sales from Christo’s work. Similarly, the Liwa mastaba will be self-financed.

“The Eiffel Tower was also self-financing and cost about the same at today’s prices as will be the case with The Mastaba,” he explains.

“Just as the Eiffel tower is a symbol of Paris and France, The Mastaba can become a symbol of Abu Dhabi.”

Christo and his wife are celebrated for other major international works, including wrapping the Reichstag in Berlin in 1995, four years before the building became home to the German parliament, and Paris’s oldest standing bridge, the Pont Neuf, 10 years earlier.

“I’m 48 so would like to think The Mastaba will be completed in my lifetime,” Yavachev says.