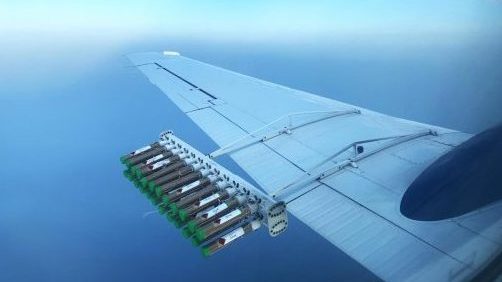 The UAE Rain Enhancement Program, UAEREP, overseen by the National Centre of Meteorology, NCM, has launched a flight campaign in the State of Texas, United States, to investigate the effect of novel cloud seeding nanomaterials on the droplet size distribution, and ultimately, the rainfall generation process.

The open atmosphere airborne tests are the culmination of successful laboratory-scale experiments and modelling studies carried out over the past 4 years, as well as the tests that took place in Abu Dhabi, UAE, last year.

The campaign is a combined effort leveraging research outcomes and capabilities from two UAEREP projects. Developed by Professor Linda Zou, a professor at Khalifa University and one of the three awardees of the Programme’s First Cycle, the innovative cloud seeding materials are being tested by Dr. Paul Lawson, Senior Research Scientist at SPEC Incorporated, USA, and one of the programme’s second cycle awardees.

Commenting on the campaign, Dr Abdulla Al Mandous, Director of the NCM and the President of the Regional Association II in the Asia Region, said, “Our planned testing campaign articulates the NCM’s continued efforts to develop innovative solutions to address the pressing global water-stress challenges.”

This campaign is an important part of the implementation and testing plan of the National Center of Meteorology, which consists of a titanium dioxide nanoparticle layer coated on the salt crystals. Experimental results obtained so far through laboratory testing and analysis suggest that this material has a much higher ability to initiate condensation of water vapour and droplet growth in the clouds than the salt crystals that are currently used for rain enhancement.

Alya Al Mazroui, Director of the UAEREP, said, “As part of the programme’s sustained efforts to accelerate scientist research in this vital field, we continue to provide the awardees with every possible support and facilities to test the effectiveness of their projects. Furthermore, our collaboration with international partners allows them to realise the full potential of their research to address the most pressing scientific issues related to rain enhancement science.”

The campaign uses a SPEC custom-designed Learjet research aircraft equipped with sophisticated cloud physics instrumentation used in various campaigns across the world. It includes two to three flights of approximately two to three hours each, using a minimum of two flares for each cloud penetration depending on individual cloud conditions. A total of 40 flares have been dedicated for the flight campaign that will be conducted in coordination with the Texas Water District cloud seeding aircraft.

The seeding aircraft will fly under cloud base and either ignite two flares in the updraft or fly under cloud base without releasing any seeding material. The Learjet will break to the right and proceed to penetrate the cloud approximately 500 to 1,000 feet above the cloud base to intersect the seeding plume in the updraft. A minimum of five clouds will be penetrated by the Learjet to obtain natural (unseeded) background conditions for comparison with the seeded clouds.