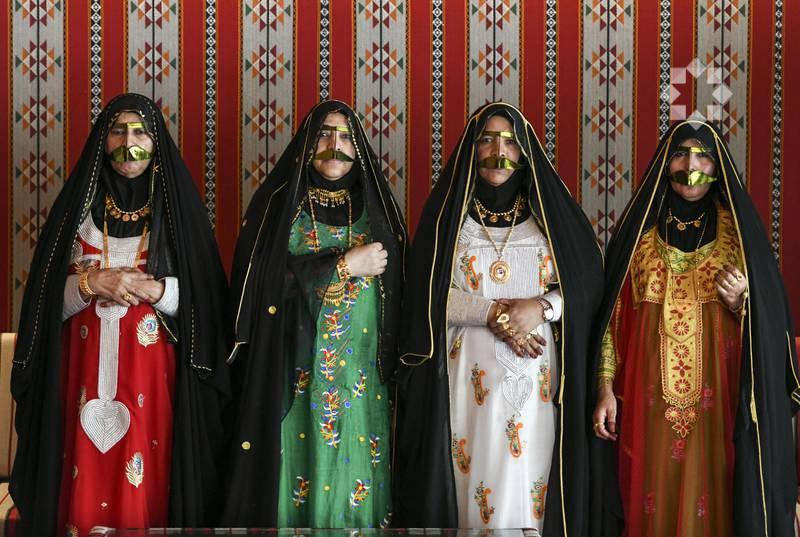 The UAE has a rich tradition of indigenous handicrafts that includes tailoring, weaving, basketry and pottery.

At the Women’s Handicraft Centre in Abu Dhabi, Emirati women are ensuring these ancient skills live on.

“From 8 or 9 years old, I saw my family weaving and of course I inherited that. They learnt that from their family, you watch them and at the very least it stays as a thought in your mind and you learn it,” Sameeha Al Kabi said.

The workshop is part of the General Women’s Union, of which Sheikha Fatima, Mother of the Nation, is chairwoman.

While its mandate is to preserve the country’s unique heritage, the women who work there make items for themselves, their families, friends and to earn a living.

They wish to preserve the country’s heritage as best they can, by practising techniques passed down from mothers to daughters for generations.

Handicrafts made at the workshop include several traditional forms of weaving. Talli is the delicate embroidery using metallic threads and silk to make the shimmery trims that adorn formal robes.

Other techniques include al sadu, tribal weaving with wool and cotton yarn; and khoos, a form of basketry in which date palm fronds are braided. These crafts demand patience and dedication to master.

A group of women will sit together and weave throughout the week, hoping to sell some creations through the centre. Since the pandemic started, they have worked from home.

The centre provides coaching lessons to anyone who is interested in learning traditional handicrafts. Some women working there learnt their crafts there, becoming skilled in several techniques before choosing one in which to specialise. Others were taught by their mothers or grandmothers.

It also includes a permanent exhibition centre. On display are everyday objects that illustrate the history of the lands that now comprise the UAE. Artefacts include Bedouin tents, rugs, blankets, traditional dress, and beauty products used throughout the ages.

The artisans recognise the value in protecting their vulnerable cultural heritage, and take pride in their craft.

“I have been with the Women’s Union for 45 years, and am one of Sheikh Fatma’s first graduates, which is such a great honour. And I am still working with them,” Nadia Al Shamsi said.

“Our country is not lacking in its heritage. When we go abroad we represent our country in exhibitions, this is our heritage we won’t forget it. The one who doesn’t have a past, won’t have a present. We will teach the next generation.”

Al sadu is a traditional form of weaving practised by Bedouins who lived in the Emirati desert.

Wool is first spun into rough yarn. Women sit on the ground, and use a simple wooden drop spindle to twist the threads together.

Wool is wound on to a wooden shuttle, which is passed horizontally by hand between the warp, the vertically strung threads. Each time the shuttle passes, the horizontal threads, or weft, are compressed with a wooden comb.

The term “Al sadu” is used for the loom, the weaving process and the final products.

Many colourful products are produced by this method, including clothing, tents, majlis floor cushions, carpets and mats.

“We cut the wool and wash it. After we wash it, we remove all the dirt and anything we don’t need, then we knit it.

“After we knit it, we lay it on the sadu. From it, we make camel saddlebags, tents, rugs, this is what we make from sadu.”

Weaving is a social activity. As women of varying ages work together, they converse, exchanging family news and stories. In this way, folk tales and proverbs passed down through the generations.

For talli, the artisan needs a special pillow and a little stand called a kajooja. The pillow is put on this stand and used as a support.

The pattern is woven or braided with several bobbins of thread. Talli is not easy; the process is time-consuming, and many Emirati women learn this craft in childhood.

The technique was invented by Bedouins, who used it to decorate the cuffs, collars and hemlines of their clothes.

“From when I was younger, about 10 years old, I have been weaving talli. And I have been working with the women’s union for 35 years,” Mariam Al Kabi said.

“The clothes were, at first, red and white cotton, but now we have a variety of colours. Any colour you want you can have made; also now we use silk. The kandura, you wear anything that suited it we can do it. We can do red, green, pink, purple, gold. Any colour you want, we do it.”