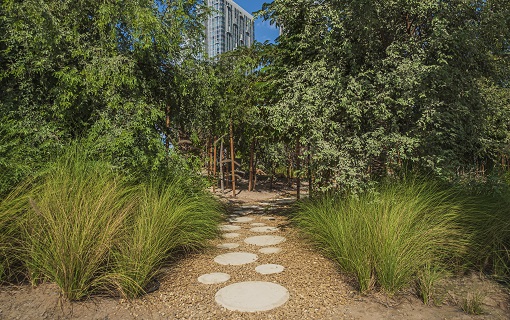 An inclusive park that has something for everyone

Dozens of residents from Al Reem Island and other parts of Abu Dhabi spent their weekend at the newly opened Al Fay Park next to Gate Towers.

Sport and outdoor play are high on the agenda at Al Fay Park, which houses hard courts for basketball and futsal, ping-pong tables, a skatepark, rock-climbing walls, monkey bars, and multiple tree-lined, cobbled and water-facing walkways.

A soft play area and fountains will keep young children occupied, while the open-plan layout lends itself well to walkers, riders and rollerbladers.

Discover urban nature at its best

Al Fay is the first of its kind in Abu Dhabi, designed using only plants, grasses and bushes that are native to the region. The designers used the landscaping and planting to maximize the potential of the site, by creating a micro-climate, that reduces traffic noise and temperature and sustains a forest-like environment. The downward slope from the road leads to the central park and funnels the cooler southern breeze down into the park while local grasses and bushes reduce sand infiltration and movement.