The project is part of the Sheikh Mohamed bin Zayed Arabian Oryx Reintroduction Programme, regarded as one of the world’s most successful conservation programmes.

The release of the Arabian Oryx is an important step toward reintroducing the animal and increasing its numbers in nature and world wildlife reserves, where it once lived. Under effective management and a long-term protection plan, it also facilitates the formation of growing herds capable of self-sufficiency and roaming freely in their natural habitats.

The project, managed by EAD and implemented by RSCN, strives to improve the genetic structure of the existing herd and reduce the possibility of genetic imbalances to create a lively herd and sustain suitable and sufficient pastoral areas for Arabian Oryx individuals.

The Shumari Wildlife Reserve will be expanded by rehabilitating land outside the reserve’s boundaries to ensure enough suitable new grazing sites for the Arabian Oryx. The project also intends to create a programme and an educational centre for school students to raise environmental awareness toward breeding and resettlement, implement an eco-tourism programme, and raise awareness among reserve visitors.

The Arabian Oryx release group was chosen to include a homogeneous and genetically diverse herd from the life department and facility at the EAD breeding group. The reserve’s adaptation pens will continue to be veterinary monitored, and the Oryx will be monitored post-release to ensure that they are in good condition, healthy, and capable of adapting well to their new surroundings.

Ahmed Al Hashmi, Executive Director of the Terrestrial and Marine Biodiversity Division at EAD, said, “The release of the Arabian Oryx in Jordan is a continuation of the efforts initiated by the Founding Father, the late Sheikh Zayed bin Sultan Al Nahyan who was dedicated to preserving the cultural and natural heritage in the Arabian Peninsula. It is also part of the implementation of the programme of His Highness Sheikh Mohamed bin Zayed Al Nahyan, Crown Prince of Abu Dhabi and Deputy Supreme Commander of the UAE Armed Forces, to resettle the Arabian Oryx in natural areas of spread, which was launched in 2007 and contributed to enhancing the numbers of Oryx in the wild.

He added that the programme boosted the efforts to protect the Arabian Oryx and increase its numbers in the wild, as well as changing the Arabian Oryx’s status in the International Union for Conservation of Nature’s (IUCN) Red List from “threatened” to “vulnerable” in 2011, a move considered one of the most significant achievements in the field of species reintroduction at the global level.

EAD hosted the General Secretariat for the Conservation of the Arabian Oryx, confirming the commitment of Abu Dhabi’s government towards supporting initiatives aimed at restoring the Arabian Oryx to its natural habitat.

The Shumari Wildlife Reserve, located near the town of Azraq in Jordan, is 120 km east of the capital Amman. Established in 1975, with the support of RSCN and the World Wildlife Fund, the Reserve is the first nature reserve in Jordan. The reserve has witnessed the release of the Arabian Oryx and is a prime Arabian Oryx habitat. 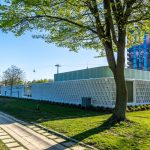